It is always unnerving, even for those who have seen it before, to watch the market meltdown as it has done this week.

But when you step back and look at the big picture, the last couple of days in the market may not have caused as much damage as you would think.

A Correction, But Not a Crash

Look at the overall chart of the S&P 500 below, which covers the time period from the beginning of our current bull market until now. 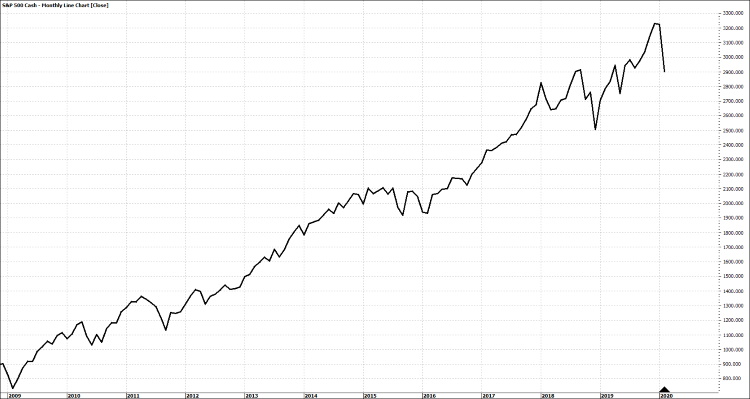 As you can see, the February pullback is meaningful. But it’s not all that abnormal compared to other pullbacks we have had along the way. As you may recall, in our Q4 2019 Letter we noted:

“Of course, a meaningful correction could happen in 2020, a quick internet search tells us that S&P 500 corrections of 10% or more, including those that turned into bear markets, have occurred nearly every 1.5 years (357 trading days) on average since 1957.”

Each time, the market found its footing and patient investors were rewarded for sticking with their positions. Will we see another rebound this time around?

Well we don’t have a crystal ball. And it’s foolish to try to predict the short-term action of the market — which is based on the fear and greed based decisions of millions of humans around the world not to mention the algo trading we wrote about in our 2019 Q4 Letter to you.

But we see that there are a lot of reasons to remain optimistic.

When it comes to the coronavirus, the outbreak is disturbing for sure. But, let’s look at the facts instead of the headlines for a better picture of where we stand today.

The current US Census Bureau world population estimate in June 2019 shows that the current global population is 7,577,130,400 (7.5+ billion) people on earth. Please keep that very large number in mind. Now, according to the website Worldometers.info:

Additionally, scientists are working around the clock to come up with a vaccination. Several treatments are now being tried.

Meanwhile, we’re are at a place where the global economy could actually afford to have a challenge like this emerge.

As we know, the U.S. economy has been growing steadily and the economic numbers (as reported on Finviz.com) reported today gave us no reason to panic.

Across the Atlantic, the European economy had been showing encouraging signs of recovery before the virus took over the headlines.

As with Ebola, SARS, the Swine Flu, and the Bird Flu, we believe this virus will ultimately be viewed as a temporary challenge for our economy. It’s becoming more of a concentrated challenge than we originally expected. But coronavirus will most likely be a temporary issue, nonetheless.

We do not say this to downplay the threat of a new “superbug” and the chaos it may cause, we are saying that this week’s action appears to be a bit extreme in the context of the actual facts and the history of similar diseases.

So, What Do We Do at This Time?

While the chart above shows that the market’s current pullback certainly isn’t a catastrophe, there’s still plenty of wisdom in protecting your wealth from what could continue to be a challenging time in the market.

The important thing to realize is that not all stocks will pull back in the same way.

Many of the stocks that were wildly popular heading into this period are now the ones that are getting hit the hardest.

Instead, we like to focus most of our investments on the stocks of companies and quality REITs with stable businesses and a history of consistent dividend payouts.

The key is to make well informed and thoughtful decisions with your capital.

Don’t just sell your stocks indiscriminately to get out of the market.

Remember that each time the market pulls back, you have a chance to buy great stocks at a discount. Without a significant change in the fundamentals of these individual companies, our dividend reinvestments are being made at lower prices than we could have gotten a week ago.

So, let’s keep our heads, keep a reasonable perspective, and use this pullback to our advantage.

If the situation should change in any way, rest assured that we are on top of it and will take actions as appropriate to the particular strategies in your accounts.