Why Isn’t Gold Rising with Inflation?

A day does not go by now without at least one article about inflation hitting the headlines. The June Consumer Price Index soared to 9.1% year over year.

So, what is going on? After all, we hear nonstop that gold is the ultimate inflation hedge, has it suddenly failed, like so many other investment truisms?

The explanation lies in the art of economics and how the various definitions of economic terms have evolved over time.

“Price increases are the consequence of inflation. They are not inflation itself.”

In classical economic terms, inflation occurs when the real purchasing power of a currency declines. This historically happens when a country increases the supply of its currency in a short period of time. We have seen this famously in countries like Argentina and Zimbabwe with stories of citizens carrying wheelbarrows full of money just to buy bread and milk.

Now, there is no question that the U.S. government has created enormous amount of money in response to the COVID pandemic.

However, for all that money printing to have an inflationary effect, it requires the velocity (or turnover) of that money to increase. Meaning that once the money gets printed, it needs to be spent so that it flows through the economy. For quite a while, including right now, that hasn’t been happening.

From the Federal Reserve Bank of St. Louis:

The velocity of money is the frequency at which one unit of currency is used to purchase domestically- produced goods and services within a given time period. In other words, it is the number of times one dollar is spent to buy goods and services per unit of time. If the velocity of money is increasing, then more transactions are occurring between individuals in an economy.

The frequency of currency exchange can be used to determine the velocity of a given component of the money supply, providing some insight into whether consumers and businesses are saving or spending their money.

Moreover, the US Dollar has actually increased in value even with the extraordinary increase of money in circulation. This includes its value relative to gold and any other commodity traded on the futures market. 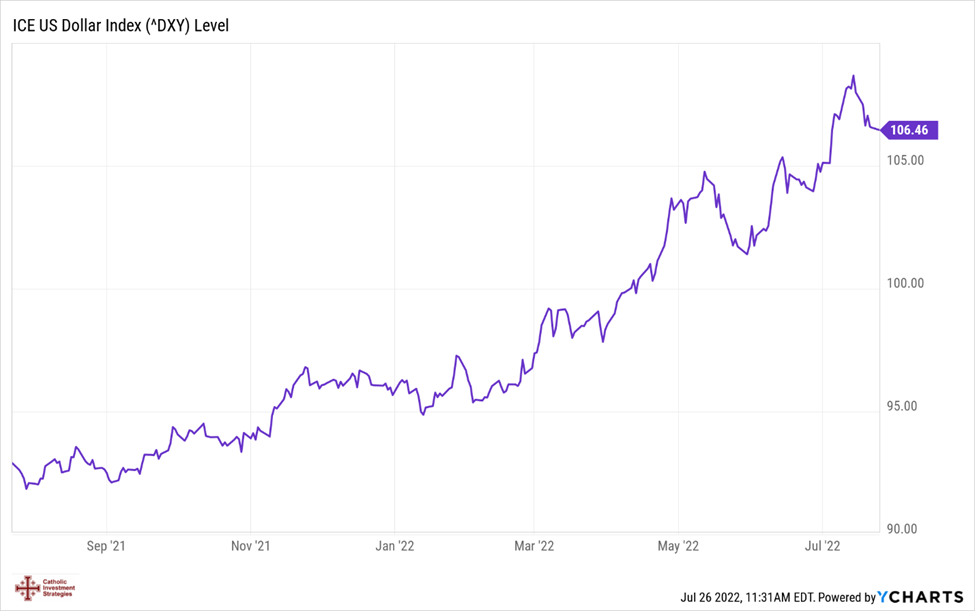 So, we are seeing higher costs, primarily caused by increases in energy and labor, making their way through the economy in the absence of a decrease in the value of the US dollar. In an environment like this, classic inflation hedges like gold, or modern inflation hedges such as Bitcoin will not protect your portfolio from higher consumer prices.