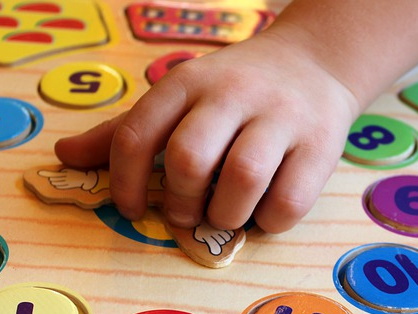 Here is a simple activity to start teaching your child the different ways of managing their cash flow and the consequences. This idea builds on an article I read before I even knew I was going to be a parent. It was written by someone writing under the name of Michael Masterson in one of the first email newsletters I ever subscribed to called “Early to Rise.”

Consider starting them on a weekly allowance.

By age five, your child is likely performing basic activities like brushing their teeth, dressing themselves and picking up their toys. We started our daughter with an allowance of $.25 per week. The allowance was not directly tied to activity but instead tied toward behavior. We created a Chore Board with 5 activities that we wanted her to take on:

Make sure they understand the specifics of each of these tasks like not giving the dogs seconds or thirds even if it’s fun. Explain that they will get their allowance every week as long as they are helping out.

Try to give the allowance in increments of five (5 pennies, nickels, dimes, dollars, etc.). We recommend this for a couple of reasons:

Then get two or three piggy banks of approximately equal size. The article I read recommended two banks, but my wife and I both share a strong belief in supporting charitable causes, so we made it three. Label the banks as follows: 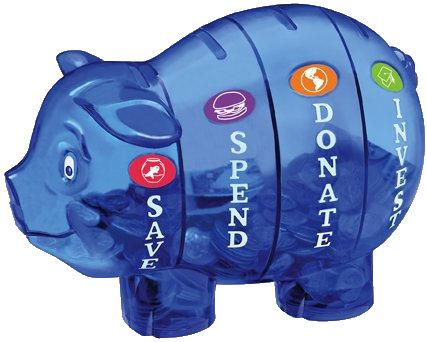 Just a quick note, we have seen, and in fact our oldest daughter at one time received, a bank like this one pictured here, from a well-intentioned friend, However, as you’ll hopefully note below, this style of one-for-all bank doesn’t provide as much of a physical impact for the child as having the three separate ones.

Hopefully, the saving and spending banks are self-evident, savings is for the future when they will have large purchases or if they ever want (or need) to live off of what they have saved versus having to work (more on this later).

Spending is for anything they want, any time they want it, but only if they have enough to buy it without taking anything from the other two banks.

As for the giving bank, at the end of each year the kids count out the money in the bank and give it to us. Then my wife and I make a donation in our daughters’ names to whatever charity they choose. If the charity is local, we usually take them to the location and let them present the check in person. Often this has led to a tour in the case of a homeless shelter or food bank. This has had a profound impact on our oldest daughter who has become a bell-ringer for the Salvation Army during the holiday season to help fight homelessness.

When you give them their allowance, tell them that they can put as much as they want in each of the banks but that something has to go into each one (you’ll probably have to do this more than once).

After they have been able to build up some savings in the three banks, it is time to put the spending bank to use.

When they ask you to buy them something, you can explain that they can now use their spending bank to buy it for themselves (assuming the proposed purchase meets your approval). Write down the cost of the item they want to buy and explain that when you get home you can see if there is enough money available in the spending bank to purchase the item.

In my experience, the child will be shocked when they see how little money is left over after you count out enough to make their purchase. Quite often, they will decide that they really don’t want to buy the item as much as they originally thought and leave the money in the bank.

At some point however, they will make a purchase or two and they will begin to notice how the savings bank gets heavier and heavier while the spending bank never gets very heavy. 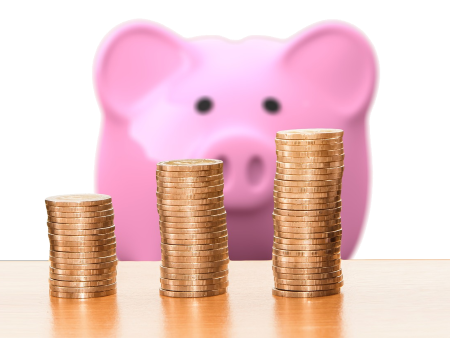 This is also a great time to introduce the concept of work to them. Make extra earnings available when they do specific jobs like pulling weeds, washing cars, dusting, etc. Try to give them as many opportunities as possible that are age appropriate. Then, when there is a special item they want to purchase, help them figure out how they can earn enough money to buy it.

You will find that over time, your child will become much more thoughtful about their savings and their purchases. They will also be very proud when they are able to buy things with the money they earned. Don’t be surprised when they tell the cashier that they are buying it with their own money.

When their savings bank gets full, “crack” it open together and count it out. Then take your child to your local bank or credit union and let them deposit it in their own custodial account. Have a place to let them keep their deposit slips and bank statements.

Talk to them about what they can do with their savings: their first car, paying for college, or even their own home someday.

Encourage them to use their imagination to consider whatever excites them. Setting a goal is a good idea and it won’t be long before they are giving you progress reports on how close they are to reaching it!