Last weekend, I went to the beach with my oldest daughter to let her play in the waves. The area we visited is apparently a prime area for surfing and there were many people out that day riding the waves.

As time went on, I noticed that most of the people surfing were in a state of constant motion. With each wave that rose up, they would scramble to get in front of it and stand on their boards, only to end up back in the water within seconds. They would then retrieve their boards and try to catch the very next wave, often not even making it back out to their original starting point before attempting another ride.

There was little thoughtfulness to what they were doing, just a mad scramble to catch each wave that came by. It didn’t take long for exhaustion to overcome them and any hope of a sustained ride disappeared.

Out a little farther out from all of this was someone I would call a more seasoned surfer.

By that I mean his hairline had receded quite a bit and his hair color was more gray than any other color. He was sitting, almost idly, on his board as wave after wave passed by. He was out there just sitting on his board for so long, I started to wonder if he was intending to surf, or just float out on the waves all day.

After a great deal of time had passed, a rather large wave started to form, and he quickly turned his board and started paddling. When the wave reached him, he stood up with very little effort and surfed for quite a distance before turning back into the wave and cannonballing into the water. He then retrieved his board and proceeded to paddle back to his original spot and once again, just drifted along as wave after waved passed under him.

In the time we were there, about two hours, he may have only surfed four or five waves. But each ride was long and seemed to be both effortless and enjoyable.

As my mind never seems to be too far from investing, it seems like this was a perfect metaphor for what we see in the investment world today.

Since the advent of cable TV and on-line brokerage accounts, we have increasingly been conditioned to engage in trading strategies versus investments. If you have the volume off, it is hard to tell if you’re watching CNBC or ESPN. People are encouraged to buy the latest market analysis tools and pay for training courses and subscriptions promising “$30,000 in 30 days flat”, or “90 days to six figures” (these are actual email subject lines) offered by the latest investing superstars.

Then, loaded up with all their new tools, they wade into the markets intent on making a killing. And just like most of the surfers we watched, trying to catch every wave and ride it in to shore, these newly minted traders begin trading everything based on technical analysis, trading programs, “expert” recommendations, stocks of the day announcements, etc. And like those many surfers, exhaustion and frustration soon sets in, causing them to either seek more tools and subscriptions, or give up on the “rigged market” altogether.

All the while, the legendary investors like Warren Buffett, Howard Marks, Peter Lynch and Bill Miller invest with the patience of that seasoned surfer who only surfed the best waves when the time was right. Instead of throwing money at every hot idea that passes by, they only invest in the right stocks when the situation is in their favor. 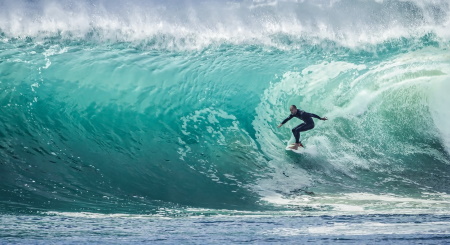 Let’s take the metaphor one step further with Buffett, for instance. Like the surfer who only rode four or five waves in the time I was watching, Buffett has, according to Yahoo Finance, a stock portfolio with 20 stock positions. Given his decades of investing, 20 stocks is not a large number, but even those are highly concentrated in only five stocks; Apple, Bank of America, Coca Cola, Wells Fargo, and American Express. Apple alone makes up a whopping 23% of his total capital portfolio. In other words, when you catch the great wave, ride it with conviction until it no longer meets your need.

I don’t know what makes a great wave to surf and it will take some time watching great surfers (and probably taking a lesson or two) to learn their criteria. But I have watched great investors for decades and I do know what they think makes a great company to invest in:

For that last item, I use Cash Flow Return on Investment (CFROI) to determine whether a stock is trading at a premium or discount. When I find a stock that meets these criteria, it’s time to yell, “Surf’s up!”