We love the holiday season as it gives us time to visit with family and friends and step away from the market for a while, unless of course we have a market like we saw in this fourth quarter and people realize what we do for a living. With headlines like:

“The S&P 500 and Dow fell for the first time in three years, while the Nasdaq snapped a six-year winning streak.”

“The Dow and S&P 500 record their worst December performance since 1931 and their biggest monthly loss since February 2009.”

We found ourselves pulled aside and being asked for investment advice or our opinion in hushed voices while celebration went on around us.

In fact, the S&P 500 and Dow Jones Industrial Average were down 6.2 percent and 5.6 percent, respectively, for 2018 which are their biggest annual losses since 2008. The Nasdaq Composite lost 3.9 percent in 2018, its worst year in a decade as well. However, these losses are not in the same ballpark as those recorded in 2008, when the S&P and the Dow fell 38.5 percent and 33.8 percent, respectively, and the NASDAQ dropped 40 percent.

A sizable chunk of this quarter’s losses occurred in December. The indexes all dropped at least 8.7 percent for the month. Traders on television and in the news had trouble pinpointing the cause of the extreme volatility: the S&P 500 was down more than 20 percent from its record high on an intraday basis on Christmas Eve, briefly meeting the requirement for a bear market, and then roared back the next session. The Dow jumped more than 1,000 points on Dec. 26 for its biggest ever single day point gain. The consensus seems to be building to chalking up December’s volatility to computer-driven trading.

Likely reasons given for the sell-off include:

We’ll address each of these ideas below.

Reading the headlines and listening to the commentary during the December decline, you would have been led to think that the bottom had fallen out of the U.S. economy and that we were on the brink of the next Great Depression. We do not believe either to be the case. Before we provide our reasoning, let us first make sure that we are using these words properly instead of provocatively as many media sources tend to do.

The standard definition of a recession is two or more consecutive quarters of declining GDP. Since a depression is understood to be something worse than a recession, many people think it must mean an extra-long period and deeper level of decline. But that is not the definition of an economic depression.

Possibly the best definition ever offered came from John Maynard Keynes in his 1936 classic, The General Theory of Employment, Interest and Money. Keynes said a depression is “a chronic condition of subnormal activity for a considerable period without any marked tendency towards recovery or towards complete collapse.”

Keynes did not refer to declining GDP; he talked about “subnormal” activity. In other words, it’s entirely possible to have growth in a depression. The problem is that the growth is below trend. It is weak growth that does not do the job of providing enough jobs or allow a government to stay ahead of the national debt.

According to the website Trading Economics, the GDP Growth Rate in the United States averaged 3.22 percent from 1947, the end of the Great Depression, until 2018. However, according to the website Statista, the average real GDP growth from 2000, when we were in the middle of the dot.com crash, until 2017, the last annual datapoint we have to examine, was 1.97%.

Over the first three quarters of 2018, US GDP advanced at an average rate of 3.3%. If growth in the fourth quarter continues at or near that rate, one could argue that, by Keynes definition at least, we might just be emerging from an eighteen-year depression. 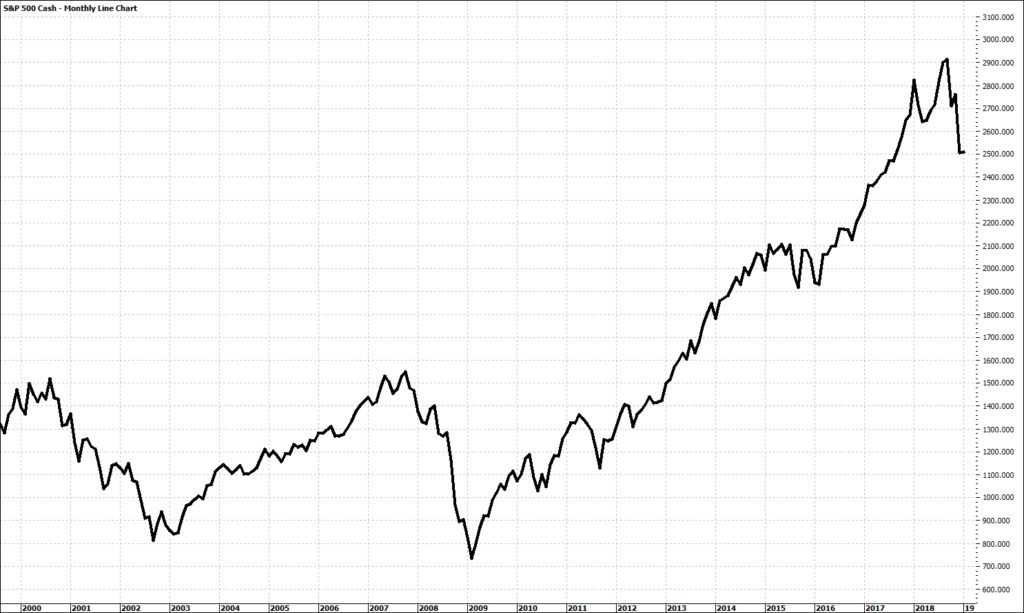 Despite what you may be hearing during your ride home, seeing on the news, or reading in your news feed, the Federal Reserve’s interest rate policy is still the number one issue driving the markets. In December, the policymakers raised the central bank’s benchmark borrowing interest rate to 2.5%. This was the fourth rate hike of 2018. Previously, they had only raised the rate four times since December 2015.

In a press conference following the December meeting, Jerome Powell also noted that rates this year were raised more times than expected because the economy was stronger and healthier than anticipated. But the Fed went on to lower its expectation for gross-domestic-product growth in 2019 by 0.2 percentage points to 2.3 percent.

Low interest rates have been the key ingredient in the almost 10-year-old market uptrend we have experienced since 2009 and the prospect of rising rates is if it makes other investments look more appealing, it makes price appreciation-driven growth much harder to come by. Recall that it was immediately after the January 2018 meeting when the Fed announced their plan for three rate increases that the market immediately experienced a two-week sell-off.

In addition to the rate hike and the projection of at least two more increases in 2019, Chairman Powell also stated that the Fed’s quantitative tightening would continue at its current pace. Quantitative tightening is the reversal of the quantitative easing policy the Federal Reserve, along with several other central banks, engaged in after the near financial collapse of 2008.

Quantitative easing is the process whereby central banks essentially create money by depositing money at private banks and other financial institutions and then buying securities from them, with the money remaining in those institutions. The intention, the central banks hope, is that this money will be loaned out to corporations and consumers in order to spur business activity.

In reversing the process, the central bank sells securities back to the financial institutions, thus draining money from the amount that the banks have on hand. That reduces the amount of money they have to lend, which, again, other things being equal, should raise the cost of money to borrowers, or interest rates.

In the U.S., the Fed ended its asset purchases in 2014 but continued to reinvest interest payments and the proceeds of matured bonds into new securities, leaving the size of its portfolio mostly unchanged. On June 14, 2017, the Fed announced it will begin reducing its portfolio holdings as the U.S. economy has finally shown sustained growth. The current pace is running off as much as $50 billion of the Fed’s bond portfolio each month. However, like QE before it, QT has never been done before, especially on such a massive scale. This worries many investors because the likely effect is that it will raise the cost of borrowing and reduce asset prices.

The impact of the rate increase and the chairman’s comments afterward started the reversal that wiped out the gains of 2018.

Some pundits have claimed that the Fed needs to raise rates so as to have more “ammo” to respond to the next slowdown. To that, our response is that it would seem rather foolish if, in the act of preparing for the next slowdown, the Fed’s actions directly cause one. Additionally, given the recession discussion above, we would point to how ineffective the Fed’s past accommodative policy (low interest rates plus quantitative easing) was for the economy.

We believe that individual stocks and the broader markets are driven primarily by corporate earnings and interest rates and so we would expect the volatility in the market to continue to rise and fall with every Fed statement and speech.

To punctuate this point, as we sit here writing this, the market is now up over 3% today “after the Federal Reserve chairman, Jerome H. Powell, said the central bank’s approach to monetary policy would remain flexible in the face of market turbulence and signs that the global economy is slowing.” – Source: Marketwatch

One last comment about market volatility, while causality is difficult to prove, we do believe this volatility is being driven mostly by computers.

According to an article this week in the Wall Street Journal, about 85 percent of all trading is controlled by computers. And I don’t mean that humans use computers to make the trades, I mean the computers are monitoring trading activity, market data and even political rhetoric and then making instantaneous decisions on what and how much to buy or sell. As the WSJ article put it, the volatility we’ve been seeing in the stock market is being driven mostly on autopilot.

This explains the speed with which these swings in the market are happening. Whereas a human might wait to make a move, perhaps being intimidated by the impact a big purchase or sale would have on the markets, computers are programmed to act the instant the market changes.

It is impossible to know how the stock market would have reacted over the last month if humans were still in charge. But the thought is that losses that occurred in a day may previously have taken a week, or month, etc.
The other thing speeding up trading is that the majority of the remaining 15 percent of investors who make their own trades trust the computers. When the computers start selling one thing heavily, these investors tend to jump on board, moving together like a herd.

Economists are having a tough time interpreting market volatility because of the computers. They can’t tell if the market is showing us the reality of the global economy to come, or if computers are simply amplifying normal “year-end nervousness.”

Regarding China and Trade

We believe that with news channels running 24 hours per day, they have an ongoing need to find something new and interesting to explain market activity. The trade war with China has been a favorite go-to explanation ever since President Trump announced tariffs on Chinese steel exports and other goods coming into the U.S.
First, let’s examine the facts as we know them:

According to the financial website, The Balance, in 2017, (the date of the most recent data available) U.S. exports to China were only $130 billion while imports from China were $506 billion.

The United States imported from China $77 billion in computers and accessories, $70 billion in cell phones, and $54 billion in apparel and footwear. A lot of these imports are from U.S. manufacturers that send raw materials or components to China for low-cost assembly. Once shipped back to the United States, they are considered imports.

China imported from America $16 billion in commercial aircraft, $12 billion in soybeans, and $10 billion in autos.
According to the World Bank, in 2017, Chinese exports were $2.3 trillion and accounted for 18.48% of China’s GDP, which was approximately $12 trillion in 2017. For the United States, total exports were $1.5 trillion, representing 7.94% of our GDP.

So, doing some very simple math, adding a 25% tariff to Chinese imports would represent a $126 billion tax hike to the over $19 trillion U.S. economy. While certainly not insignificant, it does not seem as important as the 46% increase in the prime rate of interest since 2016.

As far as which side has leverage in the negotiations is concerned, in 2017 China accounted for approximately 9% of our total exports while we represented nearly 22% of theirs. So, while certain multi-national businesses may be hurt in the short-run, as we saw with Apple, it is pretty clear that other than slightly higher prices for computers, cell phones, apparel and footwear, our economy is not very sensitive to any possible Chinese retaliatory measure. Additionally, many other countries would be more than capable of absorbing the demand for these goods, should the current situation drag on and the multi-nationals choose to relocate their operations in order to reduce cost.

While we don’t like making predictions, given the constant table pounding by the large U.S. companies, we believe that we will probably end up with another last minute New-NAFTA-like deal with better terms than we had before, but still with less than the President desires (a tariff-free world). Of course, post-deal enforcement is another issue.

In any event, we expect 2019 to be a very interesting year!