Equity investors began their celebration immediately after the November elections. On the other hand, fixed income investors made an initial exit from the bond market only to cautiously creep back in after November’s shock. The markets were reacting to President Trump’s determination to “make America great again”, partly by reviving an economy that never was able to fully recover its momentum after the Great Recession of 2008-2009.

Interestingly, the stock market has begun to falter ever so slightly as the Republicans’ failure to repeal and replace Obamacare has caused second thoughts about their ability to reshape the economy, especially through broad based changes in tax policy. The reasoning seems to be: “If they can’t agree on something that touches 14% of the US economy, how will they be successful on taxes which touch every aspect?” Only time will reveal their ultimate level of success.

As has been the case over the last months, the economic outlook is not without a mix of positive and negatives. Consumer confidence is at its highest level since 2000, and small business confidence remains high and at levels not seen since before the financial crisis. 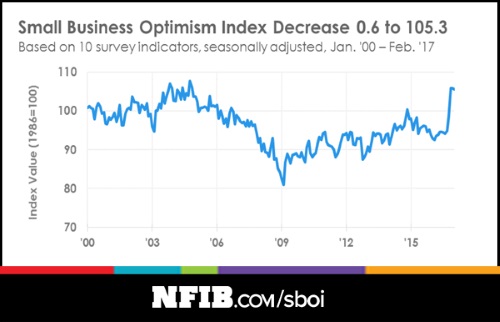 The Federal Reserve is confident enough to have raised rates in March and is talking about ongoing rate hikes over the course of the year. Nonetheless, there are some signs of possible trouble ahead. Retail sales remain weak, with the latest report showing just a 0.1% rise. Prices of used cars are in steep decline and manufacturers are offering large incentives to move new cars off the lots.

Meanwhile, pending sales of existing homes reversed course to rise sharply (+5.5%) but were outdone by new home sales (+6.1%) and new home construction (+6.5%). Conversely, multifamily starts fell 3.7%. Demand for oil looks to be somewhat weak as evidenced by recent oil price drops. Ominously, we have also seen the biggest jump in unemployment claims in six months, yet today a very strong jobs report showed companies added 263,000 to their payrolls in March, far surpassing the 185,000 expected. Our conclusion is that while economic reports are a bit muddled, we don’t see much risk of an imminent recession.

Despite looming interest rate increases, long term bond prices rose in the first quarter and short term bonds fell. The fixed income holdings in your portfolio were up a respectable 0.41% with the government holdings detracting from a stronger showing by the portfolio’s corporate bonds.

The stock market did finish a consolidation phase in late January and continued its upward move to reach new highs. Valuations remain stretched, but the market has already had a minor correction in the wake of the healthcare reform debacle and that may be all we get for a while. In all likelihood, as long as a generally positive view on government reforms and modest rate hikes stays in place and corporate earnings don’t disappoint, we would expect the stock market trend to remain upward.